Losing is no fun. One losing season is tough, two is a drag, but two decades is enough to make anyone quit. The Pittsburgh Pirates were bad. An entire generation of baseball fans in western Pennsylvania grew up without October baseball, waiting for next year. Sure they rooted for the Pirates, but the team’s fate was usually sealed by the All Star break. Next year finally came in 2013, as the Pirates finally returned to the Postseason for the first time since 1992.

Big Data Baseball: Math, Miracles, and the End of a 20-Year Losing Streak by Travis Sawchik details the Pirates return to October. Ahead of the 2013 season, Manager Clint Hurdle and General Manager Neal Huntington knew patience was wearing thin. The two previous seasons Pittsburgh had great starts only to fall apart. The collapses kept them out of the Postseason and extended their streak of losing seasons. Both men knew the team could not spend their way out of baseball purgatory, they would have to find a way to win on the cheap. The cheapest and most effective way to win is through drafting well and signing free agents cheaply. Pittsburgh needed to sign free agents that could return to their former glory and help the Pirates do the same.

The Pirates also knew preventing runs would help them win. They utilized shifts more than other teams to save runs, reducing the burdens placed on their offense. Infielders especially were positioned in places they were unaccustomed to, but trusting the data meant more batted balls were converted into outs. Pittsburgh also found value in pitch framing. Stealing a few strikes a game can alter At Bats, which can consequently alter the game. Change enough At Bats in your favor and the Pirates increased their odds of winning. The data also pointed to using the 2-seam fastball instead of the more traditional 4-seam. The sinking motion of the 2-seam meant more ground balls to the shifted Pirates defense.

None of these tweaks mattered if the players and coaches did not buy in. Pittsburgh found signed under valued free agents in Russell Martin and Francisco Liriano thanks to the work of their analytics team. Both veterans bought into the changes Hurdle and Huntington were making to resurrect their careers and the Pirates. The new school approach to baseball sometimes rubs against traditional baseball, but Hurdle did his best to meld the two schools together.

Big Data Baseball is insightful and takes readers inside the Pirates’ efforts to end their misfortunes. It does not sugar coat the difficulties the team faced internally and within the Major League system. The Pirates are at the bottom of the baseball food chain, they must gain advantages in the margins to win. Travis Sawchik pulls back the curtain to reveal the struggles with changing how a baseball team operates in a hyper competitive business. His explanations for the advanced metrics and why they matter broaden the readers’ understanding of the new data driven baseball. Love or hate how teams operate today, the reality is teams are constantly looking to win without breaking the bank.

The city of Pittsburgh took a while to believe in these Pirates. After two decades of futility and back to back collapses, the city was skeptical. Once it was clear this team had turned the corner, western Pennsylvania returned in force to cheer on the Pirates. An entire generation tried to make up for lost time with their first experience with October baseball. The pent up emotions came flooding out in and around PNC Park. Big Data Baseball recounts the rebirth of baseball in Pittsburgh after two decades lost in the wilderness. We give it a 6, a Double.

So what has led us to this World Series?  How have we navigated from the Wild Card games through the playoffs and finally to the World Series?  The field has gone from 10 teams down to just 2 teams.

The Commissioners’ Trophy is awarded to the World Series winning team. (http://blog.gospikes.com/?p=162)

The Pirates were once again a formidable team during the regular season, but they fell short in the Wild Card game.  Behind their young bats and Jake Arrieta’s complete game shutout, the Cubs showed they were the superior team, at least for one day when it mattered the most.

The New York Yankees coasted into the Wild Card game, and not in a good way.  They struggled down the stretch and benefitted from early season success to make it into the playoffs.  Unfortunately, they met the Houston Astros who were hungry and playing much better baseball.  Each passing inning, the energy inside Yankee Stadium seemed to wane just a little more until reality could no longer be denied.  Dallas Keuchel and the Astros bullpen shut down the Yankees line up and Houston rode the power of Colby Rasmus and Carlos Gomez into the ALDS. 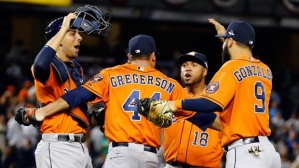 The Houston Astros are back. The won the Wild Card game a year ahead of schedule. (www.wdsu.com)

The Mets and Dodgers alternated wins throughout the series.  The turning point of the series was in Game 2 with the injury to Mets shortstop Ruben Tejada.  The Mets ultimately lost Game 2, but Tejada’s injury rallied the team together.  Tejada’s injury from Chase Utley’s “slide” could have derailed the Mets.  Instead, behind their young pitching staff and Daniel Murphy the Mets would not quit.  The Mets faced Clayton Kershaw and Zack Greinke in four of the five games and split those games.  The Dodgers were beaten with their best pitchers on the mound by a team who refused to quit.

Game 1 showed how dominant the St. Louis Cardinals could be, and it brought back the memories of the Curse of the Billy Goat for Cubs fans.  However, after Game 1, the Cubs took command of the series by winning the next three straight to eliminate the Cardinals.  The Cubs did not run away with the series, winning the final three games by seven runs total, but St. Louis was never able to answer the Cubs offense.  The Cardinals remained competitive but, after Game 1, it never felt like they had a chance.

The Chicago Cubs were overcoming the Curse of the Billy Goat. (www.deadspin.com)

The Texas Rangers jumped out to a two game lead, putting the Toronto Blue Jays on the brink of elimination.  The Blue Jays, the presumptive favorite heading into the series, would not go quietly.  Forcing a decisive Game 5 at the Rogers Centre in Toronto, the Blue Jays held a slim 3-2 lead heading into the 7th inning.  In a bizarre moment, Rougned Odor scampered home to score the tying run after Russell Martin’s return throw to Blue Jays’ pitcher Aaron Sanchez hit the bat of Rangers’ outfielder Shin-Soo Choo, while Choo was still in the box.  The Blue Jays responded in the bottom half of the 7th inning with a four run outburst, which included the now infamous Jose Bautista home run bat flip.  This completed the comeback and Toronto was on to the ALCS.

The Kansas City Royals and Houston Astros went back and forth in the first four games of their ALDS.  Neither team able to break the other team down and truly dominate a game.  All this changed in Game 5, when the Royals’ experience and the Astros inexperience showed through.  The Royals’ hitters finally broke down Houston’s pitching and were able to turn around a 2-0 deficit in the 2nd inning and turn it into a 7-2 victory.  Simply put, the Royals used some of the knowledge and nerves from their 2014 World Series run to finally put away those pesky, overachieving Astros. 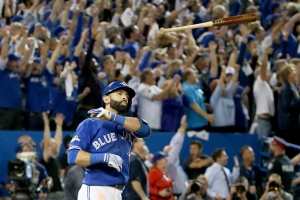 Jose Bautista and the bat flip that put the Blue Jays in the ALCS. (Photo by Tom Szczerbowski/Getty Images)

The Chicago Cubs did not lose the NLCS as much as the New York Mets won it.  The Cubs never lead throughout the four game sweep.  Daniel Murphy and the trio of Matt Harvey, Noah Syndergaard, and Jacob deGrom were magical, even when they did not have their best stuff.  Jeurys Familia and Bartolo Colon were there to pick up the slack when the young arms needed a little help reaching the finish line.  The Cubs simply lost to a better team, no Curse needed.

Daniel Murphy led the Mets to a sweep of the Cubs one home run at a time. (www.fosports.com)

Games 1 and 2 showed the Royals were the better team.  However, the Game 3 slugfest proved that the Blue Jays were not going to go down easy.  Kansas City had batting practice in Game 4, winning 14-2 in Toronto.  Toronto forced Game 6 with a 7-1 victory in Game 5.  Back in Kansas City at Kauffman Stadium, the Blue Jays and Royals proved they were an even match.  The margin of victory was Lorenzo Cain’s speed and Wade Davis’ tenacity.  Cain scored from first on a single by Eric Hosmer in the bottom of the 8th inning, in part due to Jose Bautista not throwing to his cutoff man.  The Royals took the lead and called on Wade Davis for a little more.  Davis got two outs on eight pitches to end the Blue Jays’ 8th inning, waited through a 45 minute rain delay, then pitched the inning of his life.  Davis got the final out with a fast runner on second and third by getting Josh Donaldson to ground out to third.

Lorenzo Cain’s dash around the bases was critical in the Royals returning to the World Series. (www.cbssports.com)

The 2015 World Series has the New York Mets playing against the Kansas City Royals.  The National League champion New York Mets won the National League East division by 7 games, with a record of 90-72.  Once in the playoffs, the Mets beat the Los Angeles Dodgers in the NLDS and the Chicago Cubs in the NLCS.  The American League champion Kansas City Royals won the American League Central division by 12 games, with a record of 95-67.  The Royals beat the Houston Astros in the ALDS and the Toronto Blue Jays in the ALCS.

Before the beginning of every season The Winning Run predicts how each team will finish, which teams will make the playoffs, and who will win the World Series.  Each year we are horribly wrong about almost everything.  It is with this understanding that we give our predictions about the World Series between the Kansas City Royals and the New York Mets.

*A note about our predictions for MVP, we did not allow Daniel Murphy to be selected because everyone would pick him.  Therefore, we each have our secondary MVP prediction listed and collectively we have predicted Daniel Murphy for MVP.

The Mets have a proud history of disguising themselves as other people. Just as Bobby Valentine. (www.usatoday.com)

The San Francisco Giants won the World Series in Kansas City last year. Who will win this year? (www.popsugar.com)

Collectively, beyond Daniel Murphy for World Series MVP, we do not agree on much.  We are split on which team will win.  We believe the series will go six games.  We predict that a baseball player for either the Mets or the Royals will win the MVP (this is the only prediction we feel we definitely got right).  Our predictions are most likely wrong, as is our tradition, but we might get lucky this time.  The 2014 World Series was fantastic, and the Royals are back for another try with a fairly young but experienced team.  The Mets are playing beyond their years with a playoff pitching staff that has not been seen since the Atlanta Braves in the 1990’s.   Regardless, whether we are right or wrong, we hope the 2015 World Series will be just as exciting as the 2014 edition of the Fall Classic.