The 2020 season was undoubtedly the most unusual in MLB history. The regular season was played in empty stadiums. Several teams had games postponed due to positive Covid tests, forcing them to play numerous makeup doubleheaders. The sense that games could be postponed at any moment always lurked around the corner. Even the Dodgers celebrating their World Series victory was not seamless, as Justin Turner returned to the field despite a positive Covid test. Despite all of these hurdles, plus the usual injury issues, the 2020 season was a success.

Completing the season and entering the offseason means recognizing the season’s best players. The awards voters are not always right, however this season the best players won. The condensed season allowed the elite players, enjoying long hot streaks to rise to the top. These players have built solid careers and are reaching their peaks.

Manager of the Year

Kevin Cash led the Tampa Bay Rays to the American League pennant and the best record in the Junior Circuit, 40-20. Tampa easily won the American League East by seven games over the Yankees with baseball’s fourth lowest payroll. People will focus on Cash’s handling of Blake Snell in the World Series, but he pushed all the right buttons to set Tampa up for October success. The Rays responded to Cash and excelled throughout the shortened 2020 season.

Rookie of the Year

Devin Williams won the National League Rookie of the Year award. He is the first pitcher to win the award without making a start or recording a save. Williams appeared in 22 Games for the Brewers, 4-1 record, pitched 27 innings, allowed 8 Hits, 1 Earned Run (solo Home Run to Colin Moran), 9 Walks, 53 Strikeouts, 0.33 ERA, 0.630 WHIP, and 1,375 ERA+ (not a typo). He allowed more than one hit in an appearance once, his last appearance of the season. Williams pitched two innings and both hits were erased by double plays. Devin Williams was simply dominated.

Trevor Bauer is not afraid to operate outside the box. He only cares about being the best pitcher he can possibly be, as chronicled in The MVP Machine. Bauer enters free agency winning his first Cy Young Award (27 of 30 first place votes). He went 5-4 with a league leading 1.73 ERA. In 11 starts, Bauer threw 2 Complete Games, 2 Shutouts in 73 innings, allowing 41 Hits, 14 Earned Runs, 9 Home Runs, 17 Walks, 100 Strikeouts, 0.795 WHIP (led league), and 276 ERA+. Bauer helped propel the Reds back to the Postseason for the first time since 2013. Trevor Bauer was going to command a king’s ransom in free agency, winning the Cy Young Award only raises his price.

Shane Bieber was the unanimous American League Cy Young Award winner. No other American League pitcher could have won the award. Bieber led the league in Wins, Strikeouts, and ERA to win the pitching Triple Crown. Overall in 12 starts he went 8-1, throwing 77.1 innings, allowing 46 Hits, 14 Earned Runs, 7 Home Runs, 21 Walks, 122 Strikeouts, a 0.866 WHIP, and a 281 ERA+. He dominated opposing hitters, striking out at least 10 batters 8 times. Bieber pitched masterfully despite the constant uncertainty throughout the season.

Freddie Freeman has been in the Most Valuable Player conversation for several seasons, finishing in the top 10 three times. He finished second to teammate Craig Kimbrel for the 2011 National League Rookie of the Year. Freeman is a two time Silver Slugger and has a Gold Glove on his resume. In 2020, Freeman collected 73 hits 23 Doubles (led league), 1 Triple, 13 Home Runs, 53 RBI, scored 51 Runs (led league), 45 Walks, 37 Strikeouts, hit .341, .462 OBP, .640 SLG, 1.102 OPS, and a 186 OPS+. He is the clear leader of the Braves. Freeman’s elite bat often overshadows his elite defense. He is arguably the best first baseman in baseball, a career .995 Fld%, making just one Error in 460 Chances in 2020. Freeman now has the hardware to prove he is among baseball’s elite.

Jose Abreu is a three time All Star, three time Silver Slugger, and 2014 American League Rookie of the Year. His talent was never questioned, as his rise to stardom has been long and steady. Abreu displayed his talents in 2020 winning the American League Most Valuable Player Award. Playing in all 60 games, Abreu was the clear choice. He collected 76 Hits (led league), 15 Doubles, 19 Home Runs, 60 RBI (led league), scored 43 Runs, 18 Walks, 59 Strikeouts, hit .317, .370 OBP, .617 SLG (led league), .987 OPS, and a 166 OPS+. He is the leader of the White Sox need to contend every season for the American League Pennant. Abreu is only 33 years old, he has several more peak seasons ahead.

The 2020 season was wild. Covid, no fans, divisional schedules. MLB managed to successfully navigate the season when many, including myself, thought they would fail. Recognizing the best in the game shines a light on the players and managers who rose to the top because of their skill and drive to be their best. Hopefully Covid is under control when baseball returns in the Spring and 2021 is closer to normal. Despite all the challenges, 2020 was a season to remember, especially for these winners.

Every generation has a hand full of pitchers who are intimidating when they are on the mound.  Names like Sandy Koufax, Randy Johnson, Nolan Ryan, Greg Maddux, Juan Marichal…the list goes on.  These pitchers were intimidating because they were nearly impossible to hit.  However, one pitcher on this list combined the two types of intimidation, unhittable stuff and a willingness to throw a brushback pitch whenever necessary, to perfection.  That pitcher is Bob Gibson.

Today, in honor of Bob Gibson’s 80th Birthday, let’s take a look at his brilliance on the diamond. 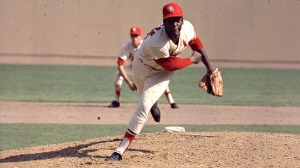 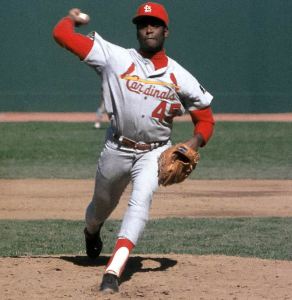 Bob Gibson threw two pitches, fastball and slider, and batters could not hit either. (www.sportsthenandnow.com)

Gibson achieved nearly everything possible during his career.  He was selected to nine All Star Teams.  He helped the Cardinals win the World Series in 1964 and 1967, winning the Most Valuable Player Award both times.  Gibson won the National League Most Valuable Player Award in 1968.  He won the National League Cy Young Award twice, in 1968 (unanimous) and 1970.  Gibson won nine consecutive Gold Gloves from 1965 to 1973.  He also pitched a no-hitter against the Pittsburgh Pirates on August 14, 1971.

The St. Louis Cardinals have retired Gibson’s #45 and have inducted him into the Cardinals Hall of Fame.  In 1981, Gibson was elected to the National Baseball Hall of Fame in his first year of eligibility. 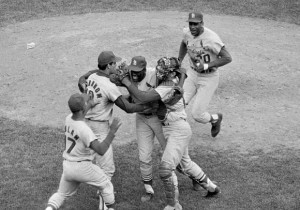 1968 was a terrible season to be a hitter in the Major Leagues, so much so that the pitcher’s mound was lowered from 15 inches to 10 inches before the start of the 1969 season.  Seven pitchers finished the season with an ERA below 2.00 and nine pitchers had a WHIP below 1.000.  Tom Seaver finished 10th in Major League Baseball with 205 SO. The top five pitchers had a minimum 260 SO. 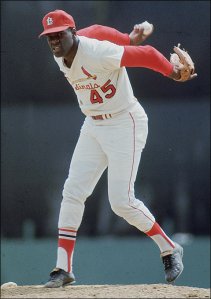 Bob Gibson was a dominant and intimidating pitcher.  Dominant pitchers like Sandy Koufax too often burn brightly for just a few years before they flare out.  Baseball was lucky to have Bob Gibson burn as brightly as a Sandy Koufax and remain healthy enough to have a long, successful career. Bob Gibson was the perfect combination of intimidation on the mound.  His accomplishments on the field have withstood the test of time.  Few players have ever dominated baseball in any manner like Gibson.  Comparing players across eras is difficult, as the game evolves over time.  However, players as dominant as Gibson are elite regardless of the era in which they played.  Legends are not contained by the era in which they play.