I can still hear legendary Yankee Public Address Announcer Bob Sheppard introducing Derek Jeter for his first at bat on Sunday, September 21, 2008. Jeter walked to the plate while Sheppard’s voice echoed around Yankee Stadium. Jesse, John, and I had flown to New York solely to watch the Yankees play the Orioles in the final game at Yankee Stadium. The House That Ruth Built was closing.

Baseball brought me to New York City for the first time. I would later live and work in New York for five years, but that first visit was about baseball. Knowing we only had one game to explore one of the greatest ballparks in baseball we arrived at 161st Street Station in the Bronx around 9:30 am, 11 hours before first pitch. We were greeted by a sea of fans who, like us, we eager to spend the day inside the House That Ruth Built before it closed. 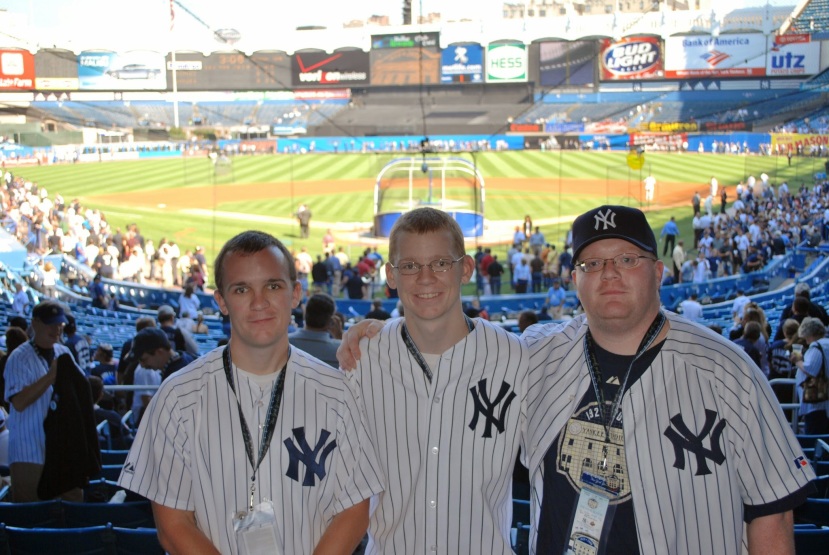 We made it to The House That Ruth Built. (The Winning Run/ JJ)

The crowd outside the Stadium was chaotic, joyous, and a bit solemn all at once. The new Yankee Stadium stood just across the street, and except for a few glances I had little interest in the building. I had come to see THE Stadium, not its replacement. After slowly making our way through the line we finally entered the hallowed stadium. We soon learned our first stop would not happen. Monument Park was at capacity and the Yankees were closing it early. We scrapped our other plans and began exploring every nooks and cranny of the stadium that was accessible. We walked around the cheap seats, the foul lines, behind home plate, everywhere but our seats. Our seats were in the right field bleachers, with the Bleacher Creatures. Once you entered the bleacher area, security would not permit you to return to the rest of the stadium. We explored until our feet ached from the concrete. Once you join the Bleacher Creatures, there is no coming back.

Our first glimpse of the field was from behind home plate. Seeing the most famous baseball field in the world, where so much of the game’s history was made, where so many legends played, felt spiritual. I remember silently standing with Jesse and John gazing at the field, soaking it in. Three baseball fanatics in awe of their surroundings. 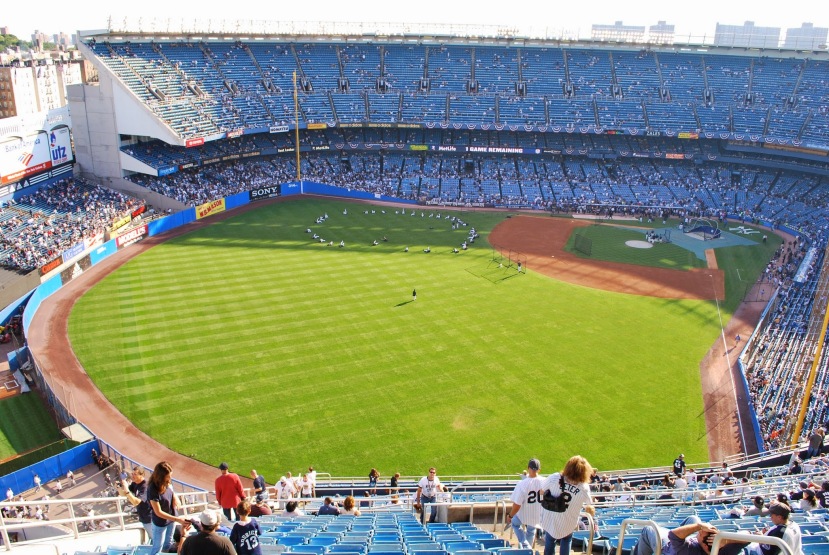 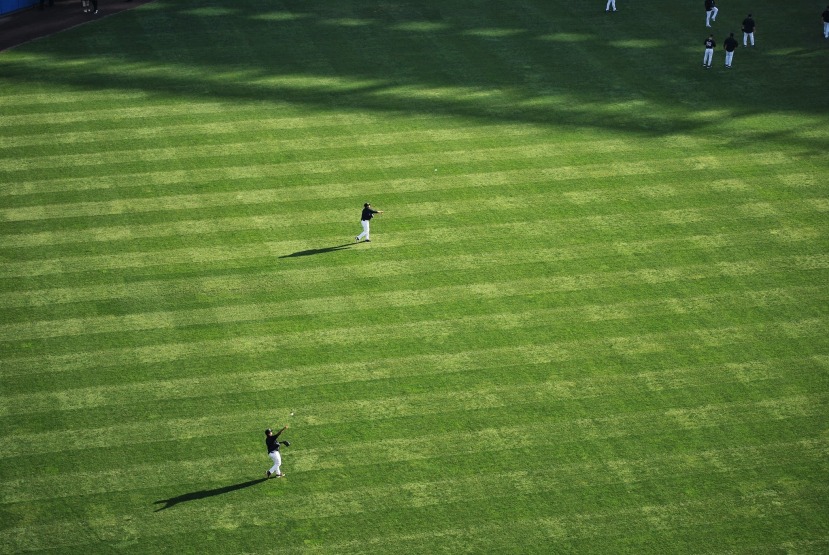 Warming up before the game. (The Winning Run/JJ) 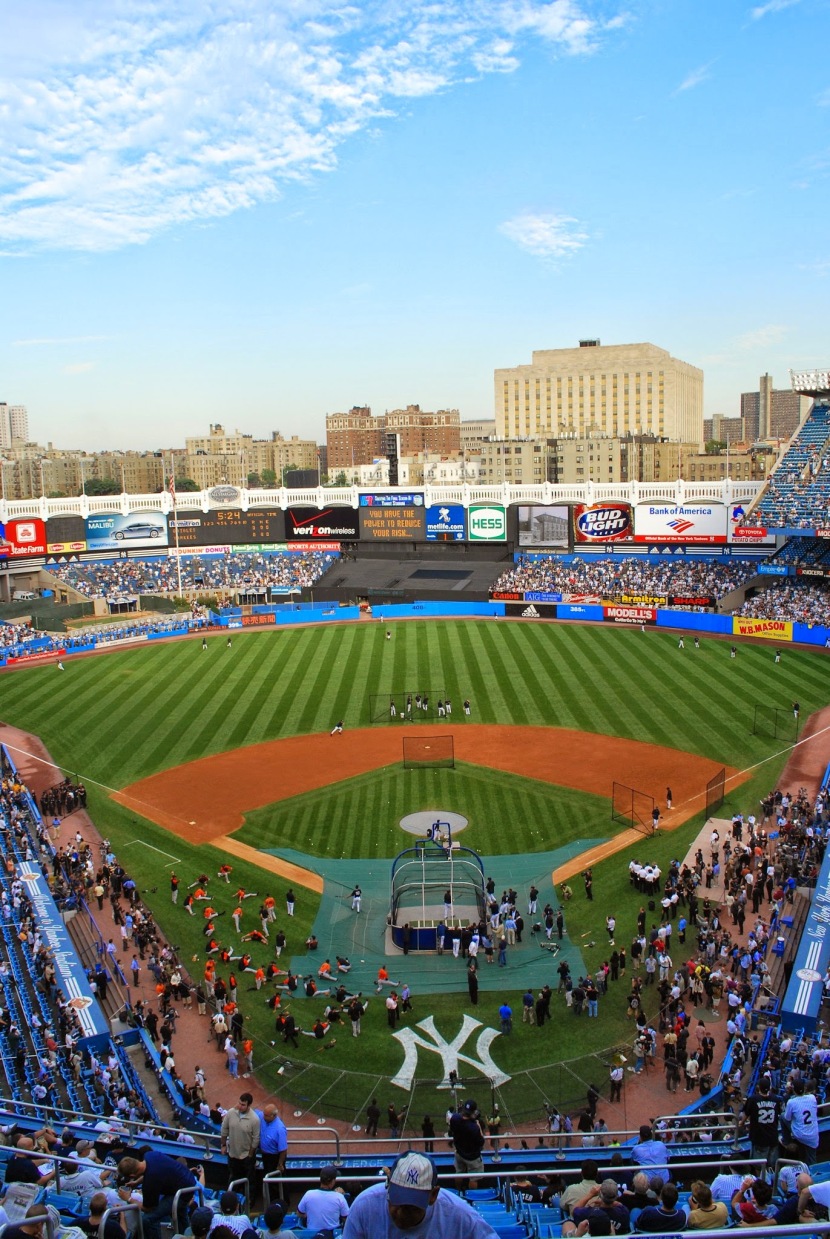 Our day touring Yankee Stadium went by in a flash before we joined the Bleacher Creatures. The pregame festivities included Yankee legends returning to the field one last time. Yogi Berra, Whitey Ford, Reggie Jackson, and other living legends were joined by the ghosts of Babe Ruth, Lou Gehrig, Joe DiMaggio, Mickey Mantle, among others. Fittingly Babe Ruth’s daughter, Julia Ruth Stevens, threw out the final first pitch in the House That Ruth Built.

Once the actual game began, it was like every Yankee game I would attend while living in New York. The nationally televised game between two teams who would finish the season a combined 36.5 games behind first place began at 8:36 p.m. There were plenty of people, like us, who were not the regulars among the Bleacher Creatures. It was easy to identify the Bleacher Creatures. They are loud, obnoxious, generally know their baseball, and above all are die hard Yankee fans. The chants began in the top of the first, roll call. Every Yankee, except the pitcher and catcher, had their name chanted until they acknowledged the Bleacher Creatures. Some players, like Bobby Abreu, waved quickly, others, like Johnny Damon, made us work for a few minutes before waving. The loudest chant was for the Captain, Derek Jeter. Jeter was the man; no one on the field commanded more respect than #2. 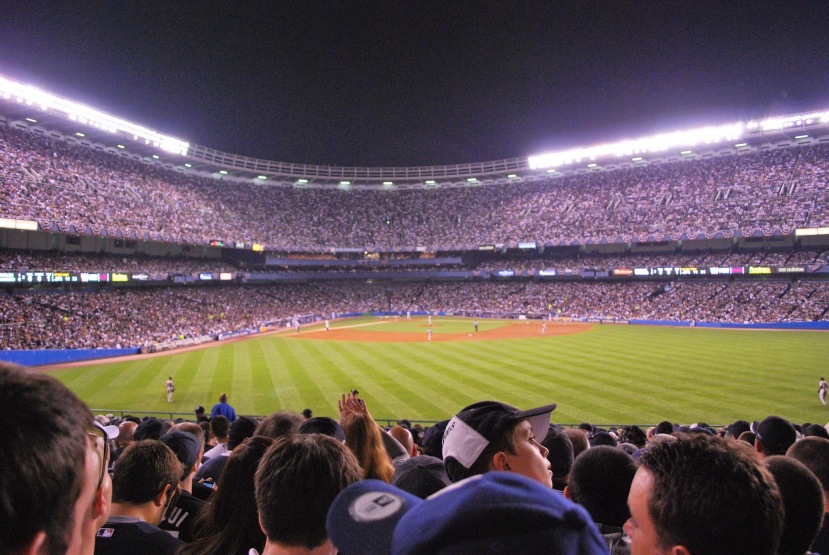 Our seats with the Bleacher Creatures. (The Winning Run/JJ)

I remember only pieces of the actual game. We went to the game for the experience, not necessarily the actual game. The Bleacher Creatures did what they do best, being loud. I have clear memories of a chant regarding Hall of Fame player and then ESPN Sunday Night Baseball announcer Joe Morgan, who was broadcasting the game. The chant was simple, “Joe Morgan Sucks! Joe Morgan Sucks! Joe Morgan Sucks!” Over and over and over. I was never a fan of Morgan’s broadcasting, but the Bleacher Creatures were less bashful in voicing their opinion. Another memory is a different chant “Box Seats Suck! Box Seats Suck!” The metal bleachers in right field were anything but leisurious. They reminded me of the bench at a little league game. The most memorable moment sitting among the Bleacher Creatures happened when people sitting several rows in front of us attempting to start the wave. Yes the wave. Every time they tried to start the wave they were booed and told to “Take That Sh@$ Back To Shea!” Eventually stadium security and the New York Police Department stepped in. This was late in the game after beer could lower people’s inhibitions. Obviously the people threatening those trying to start the wave were removed by security. Wrong. Attempting to start the wave gets you removed to the cheers of the Bleacher Creatures. I might have missed something someone said or did, but I like to think they were arrested for attempting to start the wave at Yankee Stadium.

On the field, Jose Molina hit the final home run in Yankee Stadium with a fourth inning two run shot off Chris Waters to give the Yankees a 5-3 lead. The Yankees would stretch out their lead in the sixth inning with a Jason Giambi RBI single and a sacrifice fly by Robinson Cano to score Brett Gardner. The tension was palpable in an otherwise meaningless game. Everyone wanted one last Yankee victory inside the House That Ruth Built. The Yankees led 7-3 heading into the ninth inning.

The guitar riff blasted through the speakers. Metallica’s Enter Sandman filled the stadium. The greatest closer of all time was trotting in from the bullpen. 11 pitches and three groundouts later, Mariano Rivera closed Yankee Stadium. 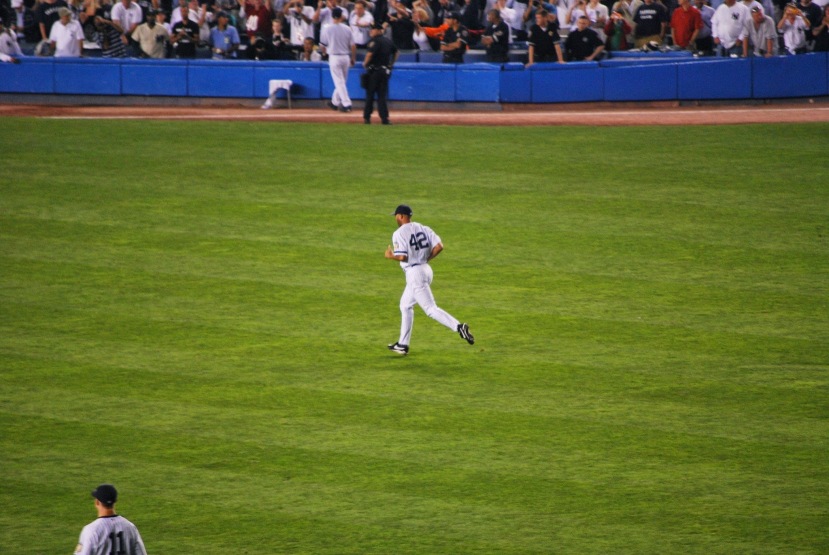 Mariano Rivera coming in to close out Yankee Stadium. (The Winning Run/JJ) 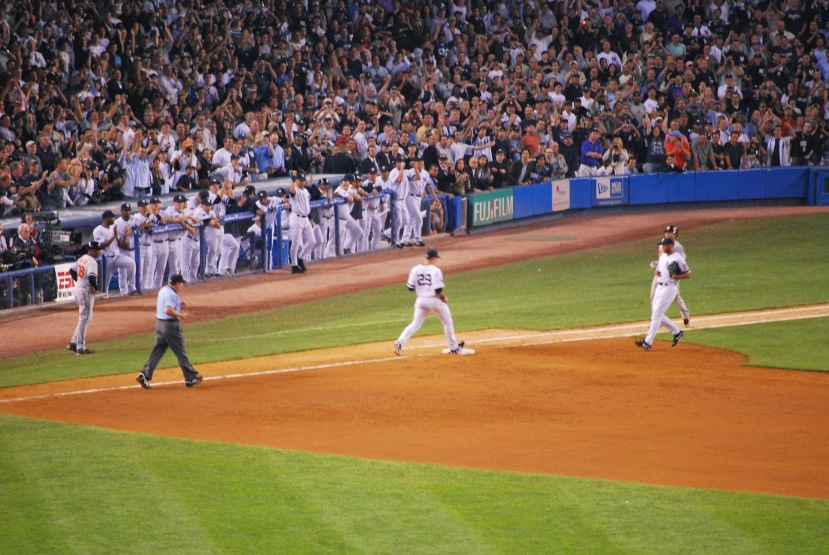 The final out. (The Winning Run/JJ) 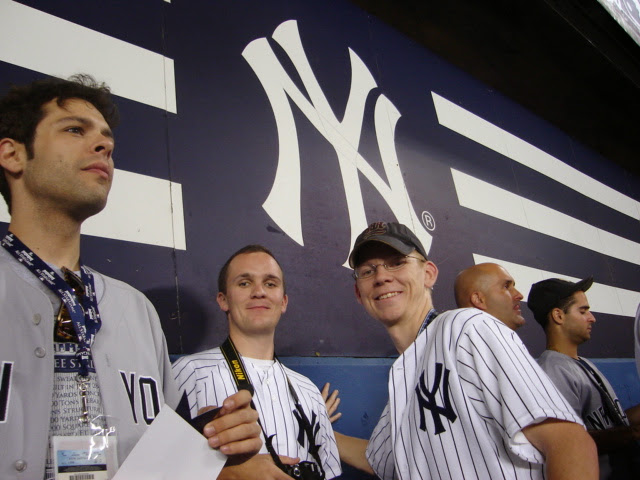 Jesse and me after the game. (The Winning Run/JJ) 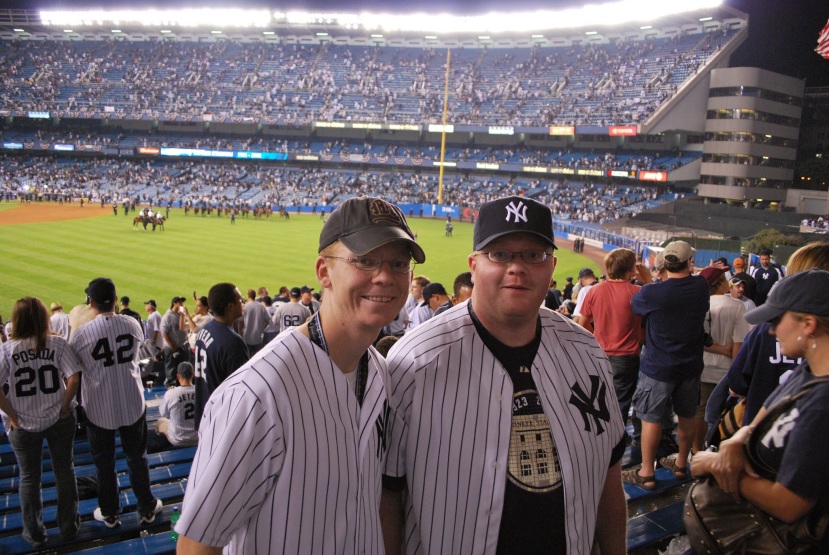 John and me after the game. Note the mounted police on the field to keep people off.(The Winning Run/JJ)

The celebration was not the World Series many envisioned to close Yankee Stadium, it was still special. Derek Jeter spoke to the crowd, thanking the fans and creating a bridge between the two stadiums. He was brief and to the point before leading the Yankees around the field to say goodbye. Yankee Stadium was the House That Ruth Built and the House That Jeter Closed.

The game ended just before midnight. An era in baseball history was closed. No one wanted to leave. Grown men were tossing empty water bottles to the player’s kids on the warning track, begging them to fill the bottles with dirt before tossing them back. Every nook and cranny inside Yankee Stadium was filled with memories and the thought of never coming back was almost too much for some to bear. Normally at the end of a Major League game the ushers and security are quick to push you out of your seats. This was different, we stayed in our seats for an hour after the final out. The crowd was slow to disperse and the stadium staff did not have the usual urgency to clear the stadium. It was after 1 a.m. when we left Yankee Stadium. No one was in a hurry to leave the ghosts of baseball history alone in a now closed Yankee Stadium.

Major League Baseball has approved a patted hat for pitchers to begin wearing this coming season as added protection against come backers which can do major damage to a players head. Obviously this padding is not going to make the pitchers completely safe, but it is better than wearing a thin hat as they have previously. Ask Alex Cobb, Brandon McCarthy, J.A. Happ, and Steve Shields if they wish they had had something between their heads and the baseball when it hit them doing well over 100 mph. I bet they would say yes. While McCarthy has already said he will not be wearing the new padded hats, I bet he would if he did not think it would impede his pitching. 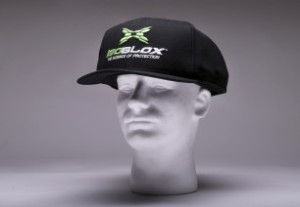 Everyone makes their own choices in life, but I am glad to see MLB is giving pitchers a choice and an additional way to protect themselves. The batting helmets, arm and leg guards, plus the tools of ignorance worn by the catchers should have shown MLB a long time ago that the pitcher needs some sort of protection as well. While they are not hit every game, when pitchers are hit everything stops. The stadium is not going to fall silent if Jason Giambi, the active leader in getting hit by pitch, gets hit on the elbow, but it will when Brandon McCarthy is hit in the head. Everything that can be done to prevent catastrophic injuries should be done to protect the players, umpires, and fans. However baseball comes with come inherit risk. Pitchers need to learn to finish their pitch and land in a position where they can protect themselves. Greg Maddux was the master at this, and his landing position helped him win 18 Gold Gloves. He was able to protect himself and be an active fielder, which undoubtedly allowed fewer base runners on and fewer runs to score. 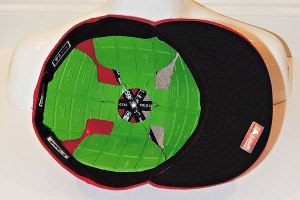 You cannot prevent every injury, it is an unfortunate part of the game, but you can mitigate it. Head injuries have become big news in football and I think MLB needs to get out in front of these preventable injuries to protect pitchers. Baseball has often been criticized for being slow to change. I think this is a perfect opportunity for baseball to show that it is serious about protecting its players from the hazards of the game.