The First Year Player Draft, better known today as the Major League Baseball Draft is upon us once again. Every team is searching for the next great player and every player believes they can become that player. Unlike the other major North American sports, especially basketball and football, the players drafted this week will not have an immediate impact on their new team. Instead the best players will spend several years in the minor leagues before they reach the Majors.

The path to the Majors has not always started with the draft. Before 1965, every team was able to sign any amateur player they wished. This allowed teams like the Yankees in the lead up to their run in the 1950’s to sign the best players through better scouting, and in some cases simply offering more money to a player than another team could offer. This not only stockpiled the Yankees farm system, but kept these players away from other teams. 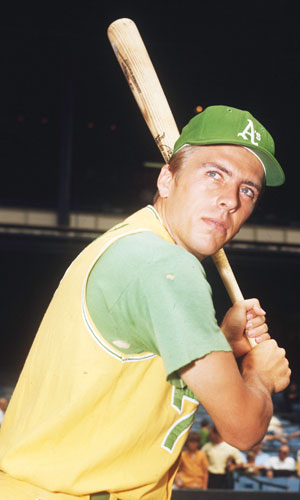 Rick Monday, the first player every selected in the MLB Draft. (www.asuwebdevilarchive.edu)

Major League Baseball created the First Year Player Draft in 1965 to create a more level playing field. Since then, the draft has gone through several changes through the years to its current configuration. However, the story behind these changes and tweaks are for another post on another day.

The draft is an inexact science which makes drafting well seem like winning the lottery. Ken Griffey Jr. was the first overall pick in the 1987 Draft and, to date, he is the only first overall pick to gain election to Cooperstown. Griffey should be joined shortly by Chipper Jones and potentially Alex Rodriguez; although I am not sure the voters are ready to welcome Rodriguez with open arms. It took 23 drafts before any team with the top pick was able to land a super star that was worthy of enshrinement in Cooperstown. If drafting was so easy, every team with the top overall selection would always turn out to be the next Bryce Harper, Adrian Gonzalez, or David Price instead of Steve Chilcott, Brien Taylor, or Matt Bush. Predicting the future is never easy. 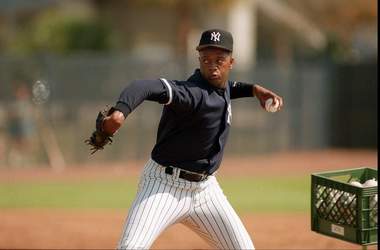 Brien Taylor never played higher than AA due to a shoulder injury that derailed his career. (Star-Ledger)

The Kansas City Athletics held the top overall selection for the 1965 Draft after finishing the 1964 season with a record of 57-105. Kansas City selected Center Fielder Rick Monday out of Arizona State. Monday was selected ahead of Hall of Famers Johnny Bench, Nolan Ryan, and Tom Seaver. Although he is not enshrined in Cooperstown, Rick Monday did enjoy a solid career. He played 19 seasons with the Kansas City/Oakland Athletics, Los Angeles Dodgers, and Chicago Cubs. Offensively, Monday was a solid player, posting a career line of:

Defensively Monday played primarily Center and Right Field, and sparingly in Left Field and at First Base. Again, Monday was a solid player in the field throughout his career, with a defensive career line of:

However, Rick Monday did not have the Hall of Fame caliber career the Athletics were hopeful for when they drafted him. Fortunately, Kansas City did not strikeout with their first selection. Monday received two votes (0.5%) in his first year of eligibility for the Hall of Fame and then was removed from the ballot. Plenty of players have long careers, yet never receive any votes for enshrinement in Cooperstown. A single or double is always better than an out.

Chipper Jones is one of the greatest switch hitters of all time, and he will soon join Ken Griffey Jr. in Cooperstown. (Curtis Compton/AJC.com)

The most memorable moment of Rick Monday’s career occurred on April 25, 1976. The play had nothing to do with baseball, yet is remembered as perhaps the greatest play in baseball history. Monday and the Cubs were playing the Dodgers at Dodger Stadium. Two fans jumped on the field in the middle of an at bat, ran into left Center Field and knelt down beside an American flag they had brought with them. The flag was doused in lighter fluid and the two people were attempting to set the flag on fire. Monday ran from his position in Center Field and snagged the flag away from the fans turned protestors and continued to run with the flag until he reached Dodger pitcher Doug Rau. Monday gave Rau the flag for safe keeping. The protesters, who turned out to be a father and his 11 year old son, were arrested, the father was charged with trespassing, placed on probation, and fined. The exact reason for the attempted flag burning remains unknown, though many theories exist. When Monday came to the plate for his next at bat he received a standing ovation from the Dodger crowd and the message board inside the stadium flashed, “Rick Monday…You Made A Great Play.” Many would argue the greatest in baseball history. 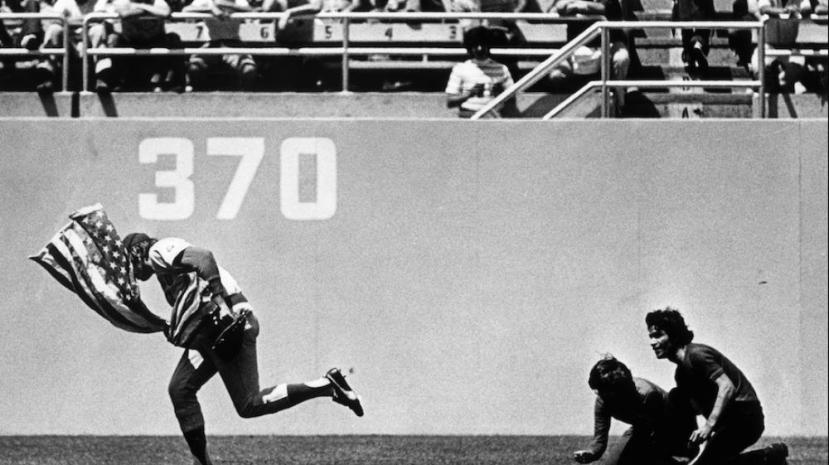 Rick Monday’s dash prevented the American flag from being burned on the field at Dodger Stadium. (James Roark)

Rick Monday was the first baseball player ever drafted. Thousands of hopeful amateur players have followed in his footsteps. Every player who has followed Monday has sought to fulfill their potential on the diamond and reach to pinnacle of the sport. Only a select few have made it to the top, and only a select few of those select few have impacted the game in such a way that they are enshrined in the National Baseball Hall of Fame. The Kansas City Athletics did not swing and miss with Rick Monday. The ability to project a player’s development several years down the road is no easy task. Players fail to reach the Major Leagues due to injuries, lacking the ability to continue to develop like a team projected, personal issues, and a million other reasons. Surviving the minor leagues and reaching the top of the sport is no easy task.

Monday had a long and productive Major League career. He was not the best player to come out of the inaugural Major League Baseball Draft, but he also was not a disappointment. The most memorable moment of his career occurred on the baseball field, but had nothing to do with baseball. Whether it was due to his time with the Marines, his sense of national pride, or simply doing what was right, Monday left an indelible memory in his dash to prevent the burning of an American flag. When asked about his dash for the flag and it being what he is remembered for Monday responded, “If I am remembered only as a guy that stood in the way of two guys trying to desecrate an American flag at a Major League Baseball game, and protect the rights and freedoms that flag represents for all of us, that’s not a bad thing to be remembered for.” I could not agree more.