The Playoffs began yesterday for ten teams, but for the other 20 teams today is the first day of the off-season.  It is time for some teams to make changes, while others stay the course.  The Astros, Rangers, Twins, and Diamondbacks have said good-bye to their managers.  The Diamondbacks and Braves have fired their General Managers.  Firing season has begun.  One firing in particular stands out; the firing of Braves General Manager Frank Wren.

Wren’s dismissal did not come as a surprise to anyone considering his track record.  Wren took over as GM with John Schuerholz promoted to Team President in October 2007.  Following in the steps of a legendary figure is never easy, but this was Wren’s task.  During Wren’s tenure as GM for the Braves the team compiled a 604-523 record, a .535 winning percentage.  The Braves won the National League East in 2013 and were Wild Card teams twice, in 2010 and 2012.  The team never advanced beyond the Divisional Series in the play offs.  The lack of post season success however was not Wren’s undoing.  Rather his track record with signing or trading for free agents.  The four major moves during Wren’s reign were, all individually to say the least, disappointing.  Collectively they were disastrous, and eventually cost him his job. 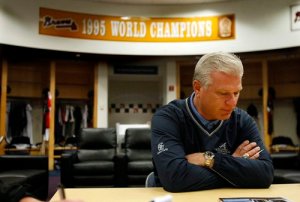 Frank Wren never made it to the promised land. (http://losthatsportsblog.com/)

On the mound, Wren signed Japanese pitcher Kenshin Kawakami to a three year, $23 million contract before the 2009 season.  During Kawakami’s two seasons in Atlanta he posted the following line:

Kawakami spent his final season of his contract in the minors pitching in Rookie ball, for the Gulf Coast League Braves, and in AA, for the Mississippi Braves.  Kawakami never lived up the expectations Wren set after signing him from the Chunichi Dragons of the Nippon Professional Baseball league.  After his contract ended, Kawakami returned to Japan and to the Chunichi Dragons.

Wren also signed Derek Lowe to a four year, $60 million contract prior to the 2009 season.  Lowe lasted three seasons in Atlanta and posted this uninspiring line:

After the third year of the contract, Lowe was traded to the Cleveland Indians with cash for minor leaguer Chris Jones, who is currently pitching at AAA Norfolk Tides in the Baltimore Orioles system.  While a serviceable starter in Atlanta, Lowe was unable to sustain the success he had had with the Red Sox and the Dodgers.  Lowe had become an overpriced luxury the Braves could not afford.  The Braves were willing to pay for Lowe to leave and took Jones to get something as a return on their investment in Lowe. 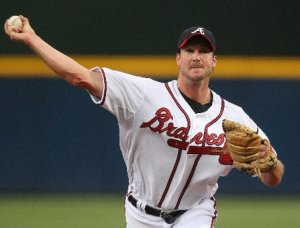 Derek Lowe was not worth the money. (nj.com)

Starting in the 2010 offseason Wren attempted to bolster the Braves offense through trade and signings.  Wren pulled off a trade with the Florida Marlins which sent Mike Dunn and Omar Infante to Florida in exchange for Second Baseman Dan Uggla.  Uggla and the Braves then agreed to a five year, $62 million contract.  The trade and contract were a disaster.  Uggla spent three and a half seasons with the Braves, seeing his production and playing time dwindled to almost nothing before he was released.  He was able to post a line of:

One of the few bright spots during his tenure with the Braves was his 33 game hitting streak in 2011.  Despite the hitting streak Uggla hit .233, which would be his highest batting average as a Brave.  His play at second was not much better; he posted a Defensive WAR of -2.1 with the Braves.  In 2014, the Braves released Uggla and were willing to pay the remainder of the contract, which was at least $ 15 million.  Uggla was reducing the Braves to a 24 man roster, and had to be moved if the Braves were to compete on any level, which ended one of the worst experiences in Braves history. 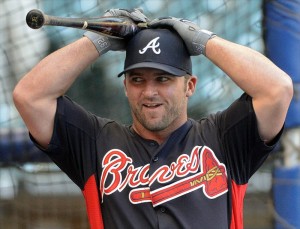 In November 2012, B.J. Upton landed in Atlanta as a free agent after eight seasons with the Tampa Bay Rays.  Upton signed a five year, $75.25 million contract.  The Braves made a major splash with the signing, but they had almost immediate buyer’s remorse.  Upton is closing out the second year of his contract and has amassed this line:

Upton has been better on defense than Uggla, but it has not been enough to counteract his offensive struggles.  Upton has a Definsive WAR of -0.4 with the Braves.  As improbable as it might seem, Braves fans are already beginning to wish Dan Uggla would come back in place of Upton.  The rumor mill has already begun about how Atlanta can get out of the contract without having to pay out all the remaining money of the contract.  It does not look promising for Upton to finish the contract as a member of the Braves.

BJ Upton just can’t get it together in Atlanta. (bit.ly)

Frank Wren gave seven years and $83 million to Kawakami and Lowe.  In return, during five seasons the Braves received:

Neither pitcher lasted the full length of their contract with the Atlanta Braves.  Wren also gave ten years and $134.25 million to Dan Uggla and B.J. Upton.  In return, the Braves received:

In five and a half combined seasons, Uggla and Upton have not produced a single season worthy of an average Major League player.  Kawakami and Lowe were serviceable on the mound but not respectable based upon their salary and expectations.  Kawakami finished his Braves career in the minors, Lowe was traded away with cash for a minor leaguer who at the time was in High A ball, and Dan Uggla was released because the Braves could not find another team to take him nor were they willing to take away playing time from their minor leaguers. Three of the four major acquisitions made by Frank Wren did not finish their contracts as a member of the Atlanta Braves.  The fourth, B.J Upton, seems destined to be the worst signing of the bunch, and at the present it does not seem too difficult to imagine a situation where the Braves get rid of him either through trade, demotion, or release.

Ultimately Frank Wren sealed his own fate through his inability to successfully acquire players who could remotely live up to their large contracts.  While not entirely his fault, Wren was highly involved in altering how the Braves play on the field.  He sought out the pricey talent from other teams.  The Braves have been highly successful in developing talent through the draft or through trades for minor leaguers or young players.  The Braves continue to have excellent pitching; it is the offense which is lacking.  While Greg Maddux, Tom Glavine, and John Smoltz were all Hall of Fame caliper players, the offense was balanced.  Atlanta had the power from Andruw Jones, Chipper Jones, Ryan Klesko, and Brian McCann.  The team also had the players who could get on base ahead of these power hitters, like Otis Nixon, Jeff Blauser, Mark Lemke, and Marquis Grissom.  The Braves forgot how to play same ball. 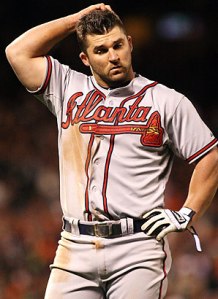 Braves fans were left scratching their heads after many of Frank Wren’s moves.(www.mbird.com)

Times change, but in baseball generally the winning formula stays the same.  Good pitching, which the Braves generally had during Wren’s tenure despite the signing of Kawakami and Lowe, and a balanced offense, which seemed to be forgotten.  Atlanta has plenty of offense to be competitive; however with a lineup full of high strikeout batters who are swinging for the fences, the difference between success and failure becomes razor thin.  Success in baseball is about scoring runs and preventing runs.  Atlanta forgot what brought them success and appeared to value highlight reel worthy home runs more than fielding a balanced team which could compete on a yearly basis.

The Braves lost their way and fell in love with both the long ball and with making a splash with high profile free agent signings or big trades.  The long term ramifications for these ill-advised signings by Frank Wren are still being felt.  B.J. Upton needs to return to hitting .240 before fans can at least say the Uggla trade was worse than the Upton signing.  The situation in Atlanta with Derek Lowe was not good.  A mediocre to serviceable pitcher at best, being paid based upon past performance and hopes.  The situation with Kawakami was sad.  He seemingly never got the run support from the Braves offense, before he began to struggle, and eventually disappeared into the minors for his final season of baseball in America.  The situation with Dan Uggla was ugly.  A guy who worked hard but most likely should have never made it beyond AA except for the Marlins thrusting him to the Majors and then the Braves believing his power was worth the lack of hitting ability.  Uggla eventually got into a standoff with Manager Fredi Gonzalez and the Front Office as he saw his playing time dwindle to nothing.  The Uggla situation became so bad the Braves, who do not have a big market payroll, were willing to pay Uggla at least $15 million to leave. 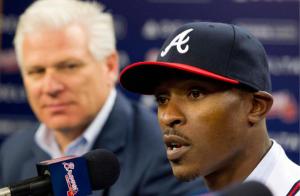 The situation with B.J. Upton looks like it could be worse than it ever was with Uggla.  Less than two years into his contract the Braves sought to trade him to the Chicago Cubs for Edwin Jackson at this year’s trading deadline.  Jackson has a worse career ERA and WHIP than Kawakami and Lowe during their time with Atlanta, and is still owed $24 million through the 2016 season.  The trade however was rejected by the Cubs.  Try as they might Atlanta will have a tough time moving Upton through a combination of poor play and over $45 million due to him during the final three seasons of this contract.  Do not be surprised if the Braves have to eat more money, this time from B.J. Upton to get out from under the last of Frank Wren’s disastrous major moves.

Frank Wren understands baseball.  You do not become the General Manager of two teams by accident.  Nor do you last seven years in a place which is used to winning and expect to win.  What went wrong for Wren is not the day to day operations of the Braves, rather it was his attempt to go out and sign priced talented players.  The signing of Kawakami, Lowe, Uggla (after trading for him), and Upton have not helped the Braves to continue winning.  It is fair to argue these signings actually hurt the team both based on their on-field performance and the money they tied up, which could not be used to go out and sign other players.  These four moves eventually caught up with Frank Wren and cost him his job.  The Braves should return to the formula which led them to over a decade of success, while integrating advances in scouting and sabermetrics to get the best out of their players and to fully understand the capabilities of the players they are looking to add to their roster.

The Braves in some ways lost their way when they fell in love with the home run and over looked the high number of strikeouts they deemed acceptable by their lineup.  The men who led the way to the Braves success, John Scherholtz and Bobby Cox, have been tasked with leading the Braves back to their winning ways and steady baseball.  Along with John Hart, Scherholtz and Cox are not trying to rediscover “The Braves Way”; rather they should aim to return to playing sound baseball.  The Frank Wren tenure is over.  B.J. Upton has some major work to do if he wants to avoid being one of the worst, if not the worst, free agents signings by the Braves ever.  Time with tell with B.J. Upton.  It is time for the Braves to return to what they know and for a long time did so well, winning through great pitching and a balanced offense, while on a budget.