If you follow baseball at all, you know that any player wearing a number closer to 100 than 1 during Spring Training is not expected to make the Major League team.  The higher a player’s number, the lower his chances are.  The majority of baseball players who are battling for a spot on the Major League team during Spring Training are worried they will have to go back to the minors and ride the buses for another season.  Every player knows they have only so many Spring Trainings in which to impress the big league club before, like all players, their careers come to an end.  When these now former players are out of baseball, they usually go back home and start the next chapter of their lives. Not so for Dalier Hinojosa and the other 77 baseball players who have defected from Cuba.  Whatever the results of their Spring Training or their career, these players can never go home again.

The inability to return home is what baseball fans often forget when they read about a Cuban player defecting.  It is not simply that they left their home country to come to the United States to play baseball in the Major Leagues.  These players left everything to follow their dreams. They cannot go home during the offseason.  They cannot see their friends and family again, unless they too choose to defect. Making the decision to defect alters the rest of their lives.  It does not matter if the player turns out to be Liván Hernández, who enjoyed a 17 year career in the Majors, or Euclides Rojas, who never reached the Majors as his career was cut short by injuries.  Regardless of which path these players’ careers take, the only certainty is they can never return to Cuba. 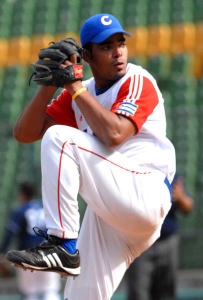 Not so long ago Hinojosa was on the Cuban National team.

The politics which have prevented the overwhelming majority of Cuban baseball players from playing in the Major Leagues are some of the final remnants of the Cold War.  Fidel Castro took power in Cuba in 1959 after overthrowing the government of Fulgencio Batista. In 1961, Castro abolished professional baseball on the island.  The American trade embargo on Cuba limited the ability of Major League teams to recruit from Cuba, while the Castro regime’s limitations on its citizens’ foreign travel further prevented players from leaving Cuba for the United States and Major League Baseball. This cut off the flow of Cuban players going to the United States, which opened the door for the Dominican Republic to take full advantage.  The inability of Cuban players to leave the island and play in the Majors has left the players with two options if they want to continue their playing careers.  They can remain in Cuba and play in Cuban National Series.  The other option is to defect and play abroad in the United States, Japan, Korea, Taiwan, or in other Latin American leagues.  Most Cuban players choose to stay for family reasons or fear of the potential repercussions on themselves and their families if they are caught, as well as the potential repercussions on their family if they are successful.  However, despite the potential penalties if they are caught, more and more Cuban players in recent years are taking the risks and defecting from Cuba.

Euclides Rojas has remained in MLB as a coach.

What is often summarized in a single word—defect—can often be a harrowing escape from authorities.  Players have slipped out the back door of a hotel while playing for the national team at an international tournament and sought asylum.  Players have also risked their lives by taking boats and rafts from Cuba to the United States. Defecting is not as simple as leaving home.  It is leaving home in such a way that you are able to escape from the control of the authorities.  Choosing to defect is both a once in a life time opportunity and an irreversible decision once made.

Imagine the pressure on a player during Spring Training who is trying to make the Major League team for the first time.  Now imagine the pressure on Dalier Hinojosa.  In January 2013, he was pitching for the Indios de Guantánamo and the Cuban National Baseball team. In March 2014, he is fighting for a spot in the Red Sox bullpen in an entirely different country, where he does not speak the language, has few if any friends, and cannot communicate with the friends and family he left behind in Cuba. All this has changed in just over a year for Hinojosa.  How would you respond if your entire world was flipped upside down in only a year?

Hinojosa will most likely begin his career here, McCoy Stadium, home of the Pawtucket Red Sox.

Hinojosa is fighting for a roster spot with the Red Sox: a spot which is not guaranteed to him.  This spring Hinojosa has posted a record of 0-2 with a 5.63 ERA in 8 innings.  He has struck out 9 batters, while walking 3.  Opponents are hitting .343 against him. Not exactly Cy Young worthy numbers.  Unfortunately for Hinojosa he did not come to Major League Baseball with the same hype and potential as an Orlando Hernandez or José Contreras.  He will not be handed a Major League job.  Hinojosa must compete and overcome the obstacles between where he is now in Spring Training and the pitcher’s mound at Fenway Park.

Dalier Hinojosa has tough fight ahead of him if he is to make the Opening Day roster for the defending World Series champion Red Sox.  The fight will continue off the field as well, in either Boston or most likely in AAA at Pawtucket.  The adjustments Hinojosa needs to make off the field are numerous, but the aid of the Red Sox organization will enable him to successfully continue building his new life in the United States.  Hinojosa’s story goes beyond balls and strikes.  He is starting over in life and baseball is his path to this new life. So the next time you are at a game, either in Boston, Pawtucket, Fort Myers, or anywhere else, and Dalier Hinojosa is pitching or another Cuban player is playing, cheer a little extra for them.  While these Cuban players might be wearing the home team’s jersey, they are continually playing on the road without a home to return to.

Less than 3 weeks until we find out who is heading to Cooperstown. @baseballhall
Stuck at home with pneumonia for the next week. Good time to watch Ken Burns' Baseball.
One last game at Globe Life Park. #FarewellGLP
Next to last game at Globe Life Park. #FarewellGLP
Braves clinched the Division + Sunday baseball= Happy Baby
Even the barges on the Ohio River love the @reds